MY NEW BLOG IS LOCATED AT LINK BELOW

https://bjcaldwell.wordpress.com/
Posted by bj caldwell at 7:13 PM No comments: 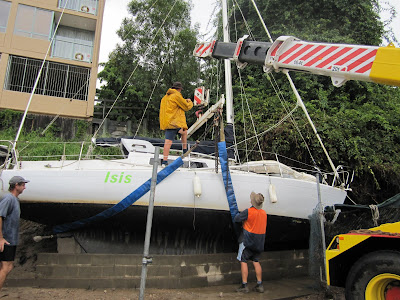 Back in Bundaberg, Australia. ISIS my trusty and need I say VERY lucky girl is unscathed save for one scratch! Unbelievable and surreal. The stories will follow in the months to come - they are simply too much for me to absorb in one go. But another big thank you is in order for Linda Pasquariello, Richard and Maree Staiton and Ray of MidTown Marinas and his son. Without all of them - ISIS would be another casuality of this there is absolutely no doubt.

Now, she might sell to pay for my debt in allocating my 'new' base - the S&S 34 'Gitano' currently waiting for me in Seattle. And the near-term objective is a possible go at what would be my 4th Mini Fastnet Race in June from Dournanez, France on my 2005 Transat 650 winning prototype #433.

If this comes to bear I would likely qualify for the 2011 Transat 650 at the end of the year in what would be my first Mini Transat Race! Ironic if I'd raced to Brazil at the beginning of the year with Jon Sanders from south to north (South Africa to Rio) and then I'd race from north to south (France to Salvador) in September solo...

And then Jon and I will do the Sydney Hobart again in December! I hope this 4th go will result in a 50% victory ratio with a 2nd win ; - ) Possible ?!

It is the Chinese year of the Rabbit for the Sagittarius (my star sign) so anything is predicted to be possible if you are a rabbit!!! 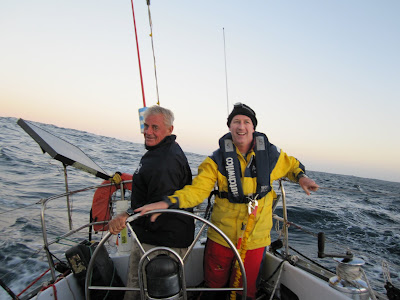 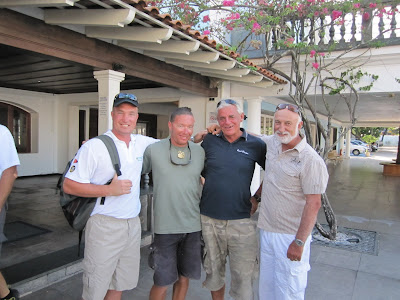 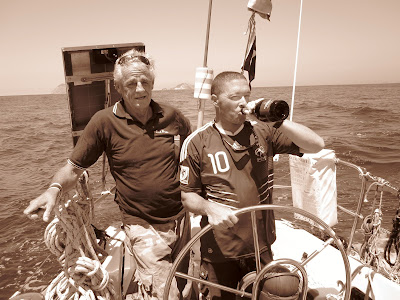 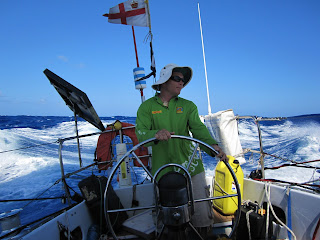 The year I was born in 1975, a particular West Australian named Jon Sanders was doing his first Cape Town to Rio Race aboard his S&S 34 'Perie Banou' at age 35...

...Thirty-five years later, I just acquired an S&S 34 and have embarked on my first Cape Rio Race with Jon at age 35 - as he did! The irony doesn't end there...

Circles within circles - it is a small world! Particularly for someone now on his 8th round-the-world and still the absolute ('World Distance Record-holder) which he set in 1988 when he broke his own mark for double circumnavigating nonstop, solo by sailing a triple nonstop unassisted solo circumnavigation!

If eight times 'round is the current definition of not resting on your laurels, I don't know what is! Besides, Jon is the most humble and down to Earth seaman I've met who can easily navigate cross-maratime culture without favoritism or patriotism.

Having done the 2009 Sydney Hobart Race with Jon and then double-handing back to Perth from Tasmania together, I've been fortunate to crew aboard three stages of Jon's current 8th 'lap' of the world which he will complete sometime this year in Sydney at the tender age of 72. Beats life in a 'retirement-home' is you ask Jon! His yacht - the S&S 39 'Perie Banou 2' IS his 'rest-home' ; - )

If I make it to my 8th circuit on the global race course at Jon's age and in such good physical and mental health to boot - I will likely have followed his example and done something right by staying away from land ; - )

In Jon's case anyway - it is 'healthier' to stay at sea versus land. Of this I have no doubt as he's drunk me under the table on too many occasions to count!

So back to this current 2011 Heineken Cape Town to Rio Race:

I flew from my S&S 34 'Gitano' in Seattle a month in advance to San Francisco to help refit Linda Pasquariello's new Pearson 33 'Yemaya'. We pulled the rig and replaced all the standing and running rigging, the running lights with LED and cut down the mast-base a fraction due to crevice corrosion on the base and stuck it back in 'Yemaya' a day before flying to South Africa.

...Arriving to Cape Town with ten days to the race start - me, Jon and Andrew Sanders (Jon's nephew) and our new South African crew-member Hannas provisioned, filled out the vast race adminstration paper-work and hoped our Brazilian visa's would be approved in time for the start.

It all worked out as always and we had a VERY light wind start that eventually filled into a south-westerly breeze as predicted by the weather files. Being designated the 'navigator' or should I say - 'navi-guesser' for the race is no small designation - especially as Jon has some VERY big shoes to fill.

Pre-race, me and Jon poured over his trusty pilot-charts. Me with my 21st century GRIB weather maps to counter the past centuries' 'averages' with the prognosis for the coming week based on the current satellite info.

We compromised with each of our chosen northerly waypoints with an initial waypoint I wrote on my hand with a magic-marker and one that was just a hundred some odd miles apart from Jon's - a thousand miles to the north-west.

A curious bystander who asked about our projected route was kept in the dark as I covered the race strategy written on my right hand with a beer in hand in my left!

The first day's south-westerly breeze that rose to twenty-five knots had us two sail reaching which is a fast point of sail that Jon's S&S 39 'Perie Banou 2' likes well and it promptly pushed us into 1st place on day one! The remainder of the fleet went into 'sheep' mode and set kites in a drag-race down the west African coast toward Namibia somewhat off course VMG toward Brazil-wise. It was more off the rhume-line and defied Jon and my phrase - "The shortest course making board" most often pays dividends versus wild cards with the respect to the course.

As the days wore on the breeze shifted aft and we too set our trusty spinnaker and it was off to the races - literally. It was quite breezy and it seems there were some broken spinnaker poles and kites in those first days on the boats around us. Andrew Sanders worked magic on the fore-deck and we tried to match his dance with our own back on the helm. Particularly to keep 'Perie Banou 2' on both feet and dancing while we jibed our way down the race-course sometimes on the edge of control as the breeze peaked at 30-knots at times under rain clouds.

As we closed with my first waypoint the rest of the fleet with the exception of 'City of Cape Town', had turned left and cut the corner of the South Atlantic High pressure system a hundred and twenty + miles south of my turning mark.

This dropped us back into 6th position but I was sure our more northerly and 'outside-lane' would pay dividends in the days and weeks to come. With a 3,500-nautical mile race-course you had to look at winning the war not just the particular day to day skirmishes. We believed that it was easier to get caught up in a game of 'follow the leader' versus have the stamina to swallow losses on the rankings in favor of a better score later.

Indeed, something like ten-days later the high pressure moved north and enveloped the fleet south of us in calms and lighter winds. This enabled us to jump up to 3rd place overall as I'd hoped. A position we'd defend for the majority of the 23-day race. In hind-sight, our trajectory around the high could have been even more extreme.

In the ten-days before the finish, the entire fleet including ourselves were swallowed by the high a second time - but this time round it had moved even further north. It was a struggle for all of us to escape it's grasp and we were back on a level battle-field with the rest of the fleet from here on out.

Unfortunately it also meant less tactical options to now be on the same latitude as we approach the finish and the lighter boats are reaching the stronger northerly wind flow sooner allowing them to extend their leads further. This dropped us back into 4th place overall. Frustrating but a good result nonetheless and more importantly we've won wisdom for the next time. As that would be Jon's 3rd attempt - perhaps the third time round will truly be the charm with regard to breaching the top three or first place for that matter!

Sailing veteran Jon Sanders, 71, currently on his 8th circumnavigation of the world, has seen some remarkable things in his time.Always diligently recording his voyages in his log books, he has onboard during this Cape to Rio race his log book from 1976, when he first navigated the world and competed in the 76 Cape to Rio race in his previous yacht Perie Banou 1.

Onboard with Jon this time is his nephew and co-skipper Andrew Sanders, navigator Brian Caldwell and Cape Town resident Hannes Scheepers (27 yrs).Whilst racing Jon has been guiding Hannes, a recent Yacht Master graduate, in celestial navigation using the sextant, the same device Jon navigated with in the 76 race. Said Jon, 'in 76 we had no electronics, we relied solely on taking fixes on the sun and stars twice a day. We reported everday to Cape Town via HF radio. These days we do have GPS for positioning but i always like to have the backup of being able to navigate by sun and stars should the systems go down. I am also very pleased to again be reporting each day with Cape Town radio via the HF. The other yachts have satellite email these days but we are doing it the same as we did in 76.

Meanwhile the course and conditions are remarkably similar to 76. Navigator Brian Caldwell, who was the youngest person at the time to sail solo around the world in 1996 as a 19 year old, is plotting and planning Perie Banou 2's course in this race.Jon says 'it is remarkable reading the log from 76 and comparing to now. Our course plotted by Brian is very similar and we are currently a little in front of where we were at the same time in the race in 76. The winds are similar too, ranging from light to moderate and at times up to 30 knts in squalls with moderate seas.'
Jon quipped 'we even saw whales in the same place as we did in 76 !'

Follow the race here on the tracker: Below is the team: 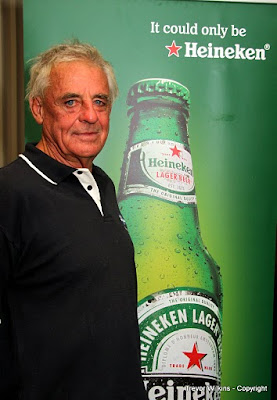 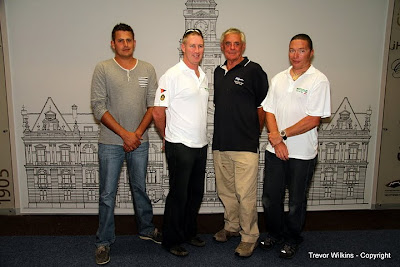 Posted by bj caldwell at 3:06 AM No comments: 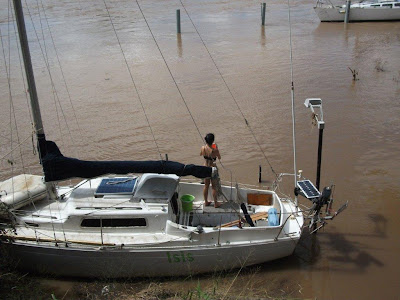 Jon Sander's relative Richard that lives in Bundaberg vowed he would have to do the Rio race if I stayed in Bundy and Linda needed her own gear off the boat for her yacht "Yemaya" in San Francisco and had to go to Aus to renew herUS visa so she is looking after ISIS while I look after Jon - a fair trade, we shall see ; - )
Posted by bj caldwell at 3:56 PM No comments: 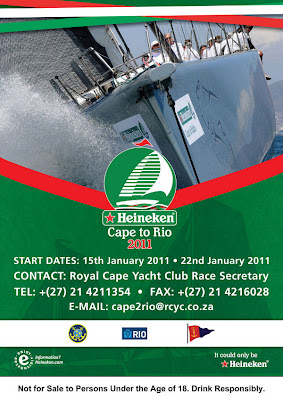 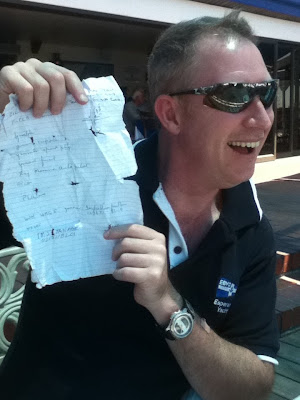 Blowing a infamous black southeaster in Cape Town and the festivities continue as Jon Sanders, me, Andrew Sanders (left: holding Jon's list ; - ) and our South African crew-man Hannes Scheepers prepare for launch!
Posted by bj caldwell at 1:03 AM 1 comment:

Well the difference from the day leading up to and on New Year's Eve is night and day. The new year is shaping up to be a ripper: Day #1 - ISIS discovered and survived! Day #2 - invited to do the TransPac Race! Day #3 - what appears to be a yacht delivery for early summer!